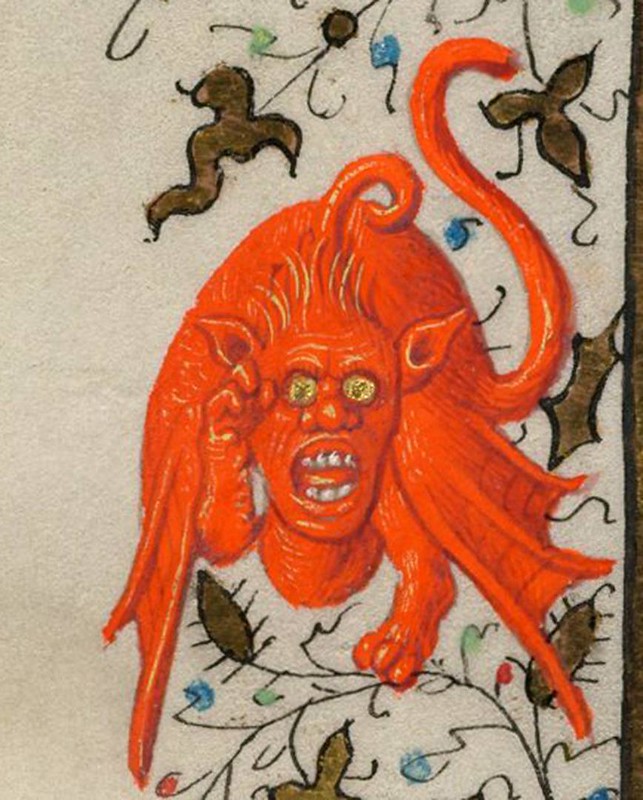 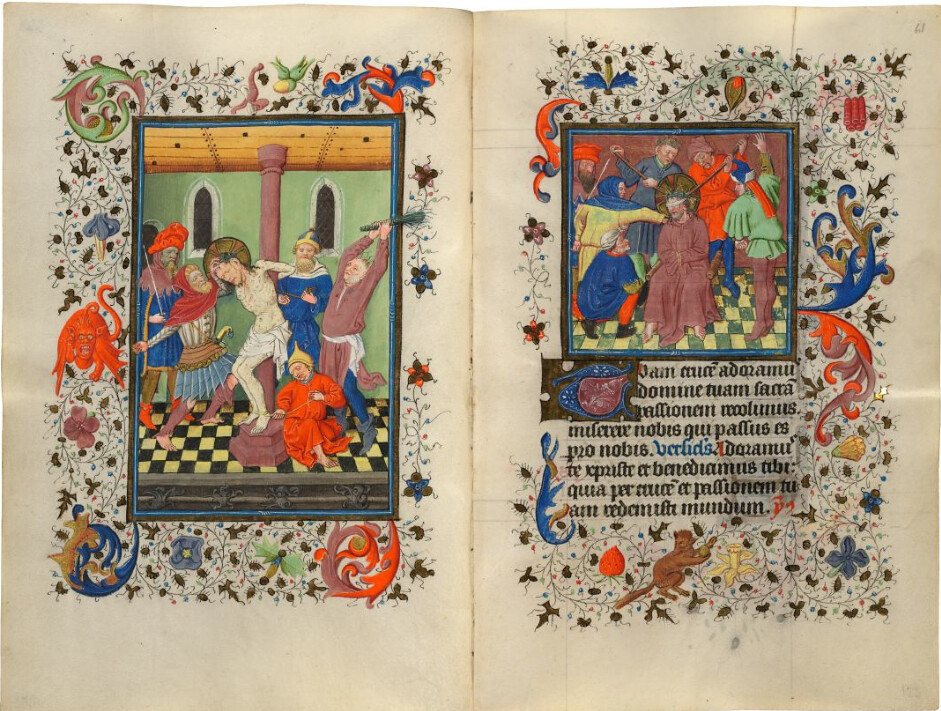 [Description. The Morgan Library & Museum.]Flagellation of Christ. Christ Crowned with Thorns. Hours of Catherine of Cleves, in Latin. Illuminated by the Master of Catherine of Cleves. Utrecht, The Netherlands. Ca. 1440. Tempera on vellum. 192 x 130 mm. Purchased on the Belle da Costa Greene Fund and with the assistance of the Fellows, 1963. MS M.945, ff. 60v–61r

Item description:
Created in Utrecht, The Netherlands, around 1440, the manuscript was taken apart sometime before 1856. Its leaves were shuffled and then rebound into two volumes to make each look more or less complete. The first part was acquired by the duke of Arenberg, whose descendants owned it until 1957, when it was bought by New York dealer H. P. Kraus, who sold it to Alistair Bradley Martin. This volume had been known by scholars as the "Hours of Catherine of Cleves."

Meanwhile, the second part had been acquired by the Rothschild family, who kept their manuscripts secret. In 1963 their volume was sold to the Morgan as yet another "Hours of Catherine of Cleves." Studying the newly acquired book (it became MS M.917) along with the Martin volume, Morgan curator John Plummer determined that they were actually two halves of one and the same codex. In 1964 the Morgan mounted an exhibition of both volumes, displaying all the miniatures via color transparencies. When a facsimile of the manuscript was published by George Braziller in 1966, the exhibition was repeated. Finally, in 1970, the Morgan was able to buy the Martin volume (it became MS M.945), and thus came to own both parts of this greatest of all Dutch manuscripts.

Both volumes have been disbound in preparation for rebinding the leaves in proper order.

Page description:
At the left, Pilate, decadently dressed in a tall bag hat worn over a dagged chaperon, directs Christ's torment, the scepter of authority in his right hand. The frail Christ is tied to a column by two men in exotically pointed hats, while two others energetically punch or flagellate the Savior's bleeding body. The unusual reddish color of the column and its base might refer to Christ's blood. In the smaller miniature, Pilate, again at the left, directs the crowning of Christ with thorns. While others continue to strike the blindfolded Savior, two men apply the tortuous crown with long staves.

Hours:
Hours of the Passion

The Hours of the Passion are often found in Books of Hours following, as in Catherine's manuscript, the Hours of the Virgin. The lengthy psalms are supplemented with prayers that narrate the story of Christ's Passion. If Catherine had little time, she might pray Matins alone, where the three lessons encapsulate the entire Passion, from Christ's Arrest until his Death on the Cross. A slower meditation is provided by the remaining Hours. The drama begins at Vespers, whose prayer narrates events from Holy Thursday: the Last Super and Christ Washing the Feet of the Apostles. Compline's prayer relates Christ's Agony in the Garden. The prayer at Lauds relates to Christ Before Pilate and Peter's Denial. The Passion concludes with None's prayer telling of Christ's Death on the Cross.

Posts from This Journal “демонология” Tag